IT’S HARD TO PINPOINT WHY ONE SONG RATHER THAN ANY OTHER SHOULD MAKE YOU WANT TO PICK UP AN INSTRUMENT. 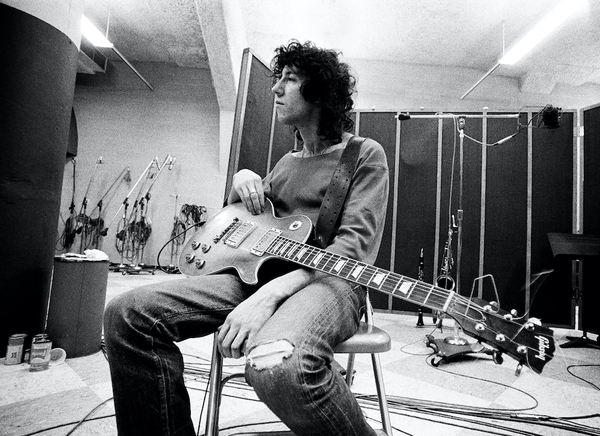 For me that song was Peter Green’s “Man Of The World”. It so appealed to my teenage romantic melancholy that I painstakingly struggled with a sheet of hand-written chord symbols given to me by a schoolmate until I could haltingly get through the relatively complex changes. A three-chord trick would have been so much easier but that three-chord trick didn’t have the feeling of Peter Green’s song. I wouldn't be playing guitar today if it wasn't for that record.

Needless to say, I quickly cast aside four weeks of classical guitar lessons, which had got me no further than learning how to balance my foot on a little stool. Once I struggled through, “Man Of The World”, I realized that so many of my favourite songs were well within my grasp and the rest is misery.

I tell this story now out of gratitude to a great guitar player, songwriter and singer, who left us yesterday. Inevitably, any news report about the loss of Peter Green was bound to be cast as a tragedy, defined by periods of mental illness, exacerbated by psychedelic drugs and incorrect diagnoses. I want to believe he is at peace now.

I prefer to focus on that brief catalogue of utterly original recordings with the early (and for me, only) Fleetwood Mac, the most famous being “Black Magic Woman”. It is hard not to wish for more records with the compressed invention of “Oh Well” and “Green Manalishi”. There are whole triple albums of the progressive rock excess that contain less imagination, fire, wit and beauty than the two sides of the “Oh Well” single.

“Green Manalishi” is a haunted song, a prediction of more tortured days. Is it a song about jealousy, demonic possession or a fear of money and acclaim? However you read it, that record is more intense and genuinely frightening than countless pantomimed evocations of darkness.

Hit parades or hierarchies of guitar players are an absurd premise but I will say that none of Peter Green’s contemporary graduates of John Mayall’s Bluesbreakers ever moved me as much as the opening bars of Fleetwood Mac’s hit recording of “Need Your Love So Bad”.

Watching that song being mimed on Top Of The Pops opened the door to the riches of Little Willie John’s original recordings. Later still, I realized that no English guitar player ever got as close to the intensity of Otis Rush’s Cobra sides as Peter Green did on “Stop Messin' Round”. There was such love and respect in the way Peter Green, the songwriter, absorbed the lessons of great blues records and wrote them out in a new kind of song.

He was also a beautifully expressive singer, my favourite vocal performance being that set against the mournful horn refrain of “Love That Burns”.

A slow humming rhythm actually put this “blues band” at the top of the pop charts in late 1968. Twenty years later, it was acknowledged by George Harrison that The Beatles, “Sun King” was modeled on Fleetwood Mac’s chart-topping instrumental, “Albatross”.

Moviemakers have frequently used Santo & Johnny’s “Sleepwalk” as the soundtrack for that last romantic dance, the very title seeming like an invitation to dream. “Albatross” may be an unlikely title for a romantic hit but when I happen to hear it playing, I see a row of colour twinkling lights hung above the deck of a converted troop ship which served as floating classrooms on a school cruise around the Mediterranean in the Spring of ’69.

I was 14 and there was a slow dance and a girl who I never saw again. Or as Peter Green would put it in “Man Of The World”:

Elvis Costello 2020.
Last edited by sweetest punch on Sun Jul 26, 2020 8:11 am, edited 1 time in total.
Since you put me down, it seems i've been very gloomy. You may laugh but pretty girls look right through me.
Top

Elvis talks about Peter Green in this interview: viewtopic.php?f=2&t=11068
Since you put me down, it seems i've been very gloomy. You may laugh but pretty girls look right through me.
Top

Elvis's version of Love That Burns was released on this promo single .

It's fair to say you can probably hear the influence that "Oh Well Part 2" must have had on The MacManus Gang EP "A Town Called Big Nothing" from 1987.

Elvis Costello is a musician of remarkable pedigree. Over 40 years since he released his iconic debut My Aim Is True in 1977, he has done it all. The bespectacled hero is a Rock and Roll Hall of Fame inductee and has won two Grammy Awards, to point out just two highlights of his extensive career. Oh, and he has featured on numerous soundtracks, on films ranging from The Big Lebowski to Notting Hill. It’s fair to say, Costello is a legend of music.

Costello is of such stature; he has collaborated with a countless list of sonic legends. These include Brian Eno, Johnny Cash, Madness, Burt Bacharach and Tony Bennett. No need to mention Kid Rock.

Summing up his influence, the ‘Less Than Zero’ mastermind was included in a redux of Sir Peter Blake’s most famous artwork — the cover of the Beatles’ Sgt. Pepper’s Lonely Hearts Club Band. This rework of Blake’s iconic work was intended to celebrate Blake’s 80th birthday, designed as a celebration of the British cultural figures of his life that he most admires. Costello was in an esteemed company. The new cover featured Twiggy, Amy Winehouse, Noel Gallagher and Tom Stoppard, to name but a few. On being included, Costello remarked: “I always dreamed that I might one day stand in the boots of Albert Stubbins (the Liverpool footballer who appeared in the original artwork).”

Outwardly, Costello has clearly had a significant impact on culture over the last four decades. However, it makes us wonder what influenced him. What song, artist or group made our dapper, Jarvis Cocker progenitor tick? What music started him off on his path to greatness?

Costello came from a line of musicians, so it is no surprise that he followed in his forefather’s footsteps. He has mentioned Mel Tormé and The Hollies as early influences to his unique sound. However, he remembers 15 as being the most significant age. It comes as no surprise then that he singles out Fleetwood Mac’s 1969 single ‘Man of the World’ as the song that made him pick up the guitar. This revelation adds Costello to a long list of guitar heroes influenced by Peter Green‘s emotive, technical playing.

Costello recalls, “There was something about the moody, romantic idea of this song that I absolutely identified with, as ludicrous as that notion is when you read the lyrics: ‘I need a good woman’ sounds like very wishful thinking for a teenager. I was the youngest in my class at school, and I didn’t have a girlfriend at that age. ‘Man of the World’ is a dream that I had of what I might be if I ever plucked up the courage to talk to a girl.”

In addition to being a lovelorn, typical 15-year-old, Green’s guitar playing captivated Costello’s young and impressionable character. “This is the song that specifically made me pick up a guitar. It was a weird song to learn because it’s very complicated, but it fascinated me.”

Just like the British guitar hero and cultural icon of the future, Noel Gallagher, a disciple of Green, Costello would also be magnetised by the family’s unused guitar. “I had a guitar that just sat in the corner of my room. It was a Spanish guitar bought in Spain on a holiday that my folks and I had taken, and I must have had it for five years by that point,” he said, before adding: “It was just gathering dust with old toys, and then I picked it up and learned how to tune it. Somebody gave me pictures of what the chords looked like in diagrams, and I very painstakingly taught myself to play just that one song. That’s all I could play. I had a one-song repertoire, but it was a hell of a good song.”

There we have it. Fleetwood Mac, or specifically Peter Green, add another iconic string to their bow. Elvis Costello is a dynamic guitar hero in his own right, so, retrospectively, it isn’t shocking that early Fleetwood Mac transfixed him and made him pick up the dusty old six-string. Without this moment, British culture would not be the same.
Since you put me down, it seems i've been very gloomy. You may laugh but pretty girls look right through me.
Top
Post Reply
6 posts • Page 1 of 1